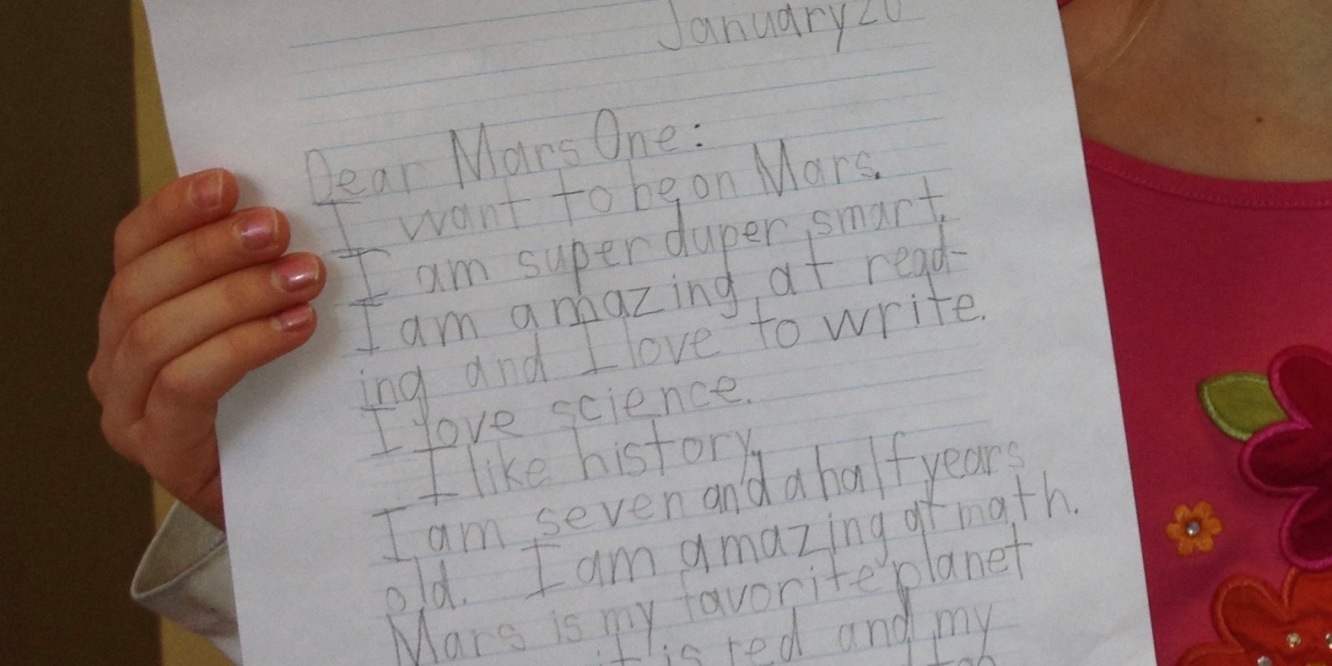 As you might have figured out, I love to write. But I didn’t start by writing articles.

I was obsessed with writing letters to famous people and organizations that inspired me back when I was little. I wrote everyone from the President of the United States to the author of the Fancy Nancy books (because they were my other obsession at the time!).

I wrote NASA and the president of my favorite university, the one my parents tell me costs way too much.

I wrote Olympians and princesses—the real kind—not the Disney kind.

And then I wrote some more.

A lot of the time… no, most of the time… I got replies.  But none stood out in my memory as much as the response I got from Bas Lansdorp, the founder of the Mars One Project.  I wrote them when my grandpa saw an article about it. Grandpa loved the idea of space travel, and now that he’s gone from this planet, I like to think he’s up there in the stars watching over me.

Not only did Bas Lansdorp himself write me back personally, he even sent me a t-shirt and stickers, and also posted my letter on Facebook (with my mom’s permission, I might add). That was my first foray into social media.

I got 605 likes on that post—more than I could ever hope to receive here on my humble website… though I still endeavor for a repeat.

Most of the comments were really nice and supportive. 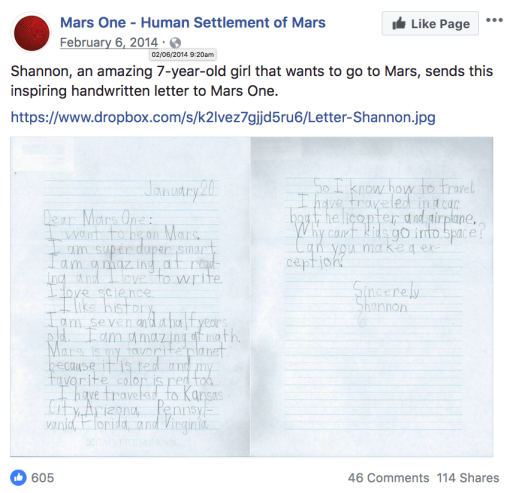 But then there were the naysayers.

They wrote comments that suggested the letter was a fake… that no child could write that!

I’m flattered they thought it was fake.  I’m elated that my handwriting and my lexical acuity was so impressive that they were made to think my letter couldn’t be written by a seven-year-old.

But it was ME!

Here I am, five years later, still writing. My letters don’t get answered as often which is kind of sad. I suppose that the “cuteness factor” has worn off now that I’m typing my letters or writing them in the cursive that my mother made me learn even though only some of my friends can read it.

And I’m twelve. I’m a tween. Tweens don’t get much respect. We just get pimples.

I still love the Mars One Project, even though I have no interest in going to Mars anymore if it’s a one-way trip.

I’d need my dog… my parents… my band… my friends… and maybe Ryan Gosling.

But I still embrace the idea of Mars One.  I think it’s incredible how they sparked a whole new conversation, encouraging us to reach for the stars, both literally and figuratively. Now, everyone is talking about landing people on this new frontier.

Mars One broke the mold. They thought outside of the box. They nixed the norm.

Wait… that’s a great name for a website, isn’t it?

Best of all, they challenged us to think beyond the confines of our planet, sparking that pioneer spirit that always reminds me of my favorite John F. Kennedy quote, “We choose to go to the Moon in this decade and do the other things, not because they are easy, but because they are hard…”