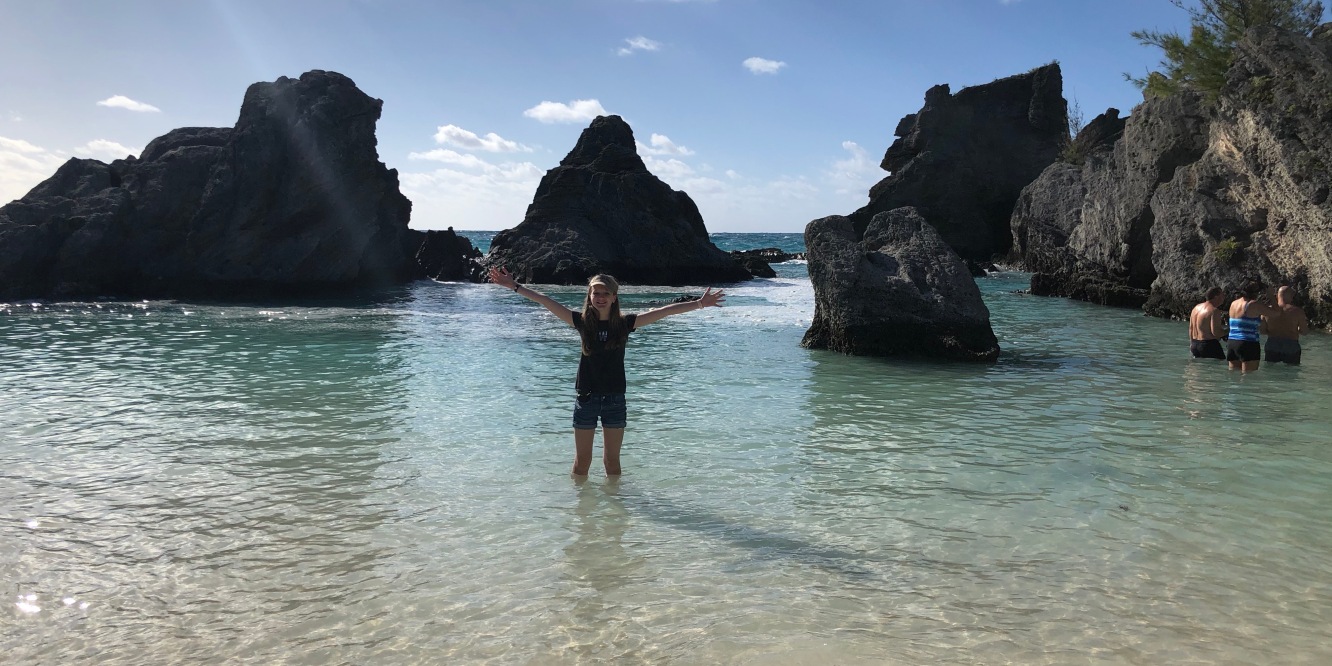 Do you feel like you are trapped at home this winter? Tired of shoveling snow, slipping on ice patches, and shielding yourself from slushy downpours with a too-small umbrella? Here’s an easy winter getaway for people on the East Coast that’s also easy on your wallet!

You don’t have to take a plane to travel to a tropical paradise. Instead, take a cruise out of New York City.

We chose the Norwegian Cruise Line’s Escape and headed to Bermuda for a five-day adventure. Some people might choose to take the four-hour drive to NYC to meet the ship. But rather than dealing with parking and unpredictable traffic, we chose to take the three-hour train ride that dropped us off at New York’s Penn Station. The train is so much more comfortable than a plane, I found, with bigger seats and space to walk around. Also, you don’t have to arrive two hours early to catch a train, unlike when you take a plane anywhere.

When you arrive at Penn Station, it’s just a simple cab ride or Uber to the New York City Cruise Terminal where our ship departed. NYC is a spectacular spot for taking photos, so don’t forget to take some selfies as you head to the terminal and enjoy your sneak peek of the city.

All the real fun begins when you arrive on the cruise ship. Most of the restaurants and entertainment are included. Parents can go on date nights without having to worry about the prices of food or child care. For teens like me, there are plenty of ways to escape your parents. On our NCL ship, I spent most of my time in Entourage, a fun club just for teens ages 13-17, with foosball, video games, air hockey, and fun events like ship-wide scavenger hunts. And there are no parents allowed, which I absolutely loved.

The best part of taking a cruise is that once you’re on board, you won’t have to deal with any more driving, parking, or traffic (except for occasional lines at the buffet-style restaurants). All of the activities are just a short walk or elevator ride away, including the waterslides, pools (including an adults-only one), arcade, rope course, mini golf, sports complex, bowling and arcade games at O’Sheehan’s, and so much more – all on board our NCL Escape cruise ship! Other ships offer different options and activities, but there are plenty to choose from that leave from our neighbor, New York City.

More fun awaits you when your ship arrives at its destination. Our destination was Bermuda, where our ship was docked overnight, so I had lots of time to enjoy the pink sand beaches, shopping, crystal-clear turquoise waters, and colorful buildings. Even though it was a little too chilly to swim, it was still paradise. Other cruise destination options include the Caribbean, Florida, New England, and even the Panama Canal.

Here are some tips for getting the most out of your escape to paradise: Book early for the train. As the train gets filled up, the prices get higher. Buy trip insurance. It’s the flu season, so you’ll want to get your money back if you get sick and have to cancel your cruise. Look into packages that include free drinks for adults — it saves a bundle! When we went, NCL was having their Free at Sea Promotion. This promotion includes free wifi, specialty dining, and endless drinks for parents. Also, be sure to arrive at your ship with plenty of time. When we took our recent cruise, we had to be on the ship two hours before they left the dock.

A nearly effortless sojourn, cruises offer many fun activities, entertainment, restaurants, and more. So you can see why a cruise departing from NYC is a great escape from the winter doldrums.