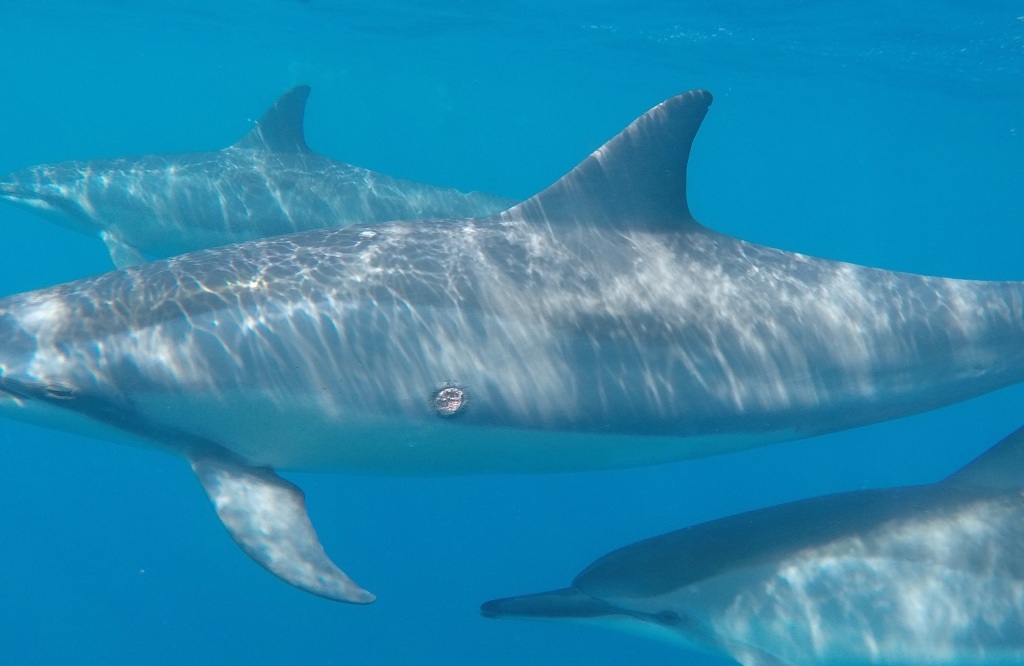 Swimming with dolphins is a bucket list experience that many people would enjoy. While doing so, it may even be tempting to swim close for a selfie or grab a fin for a ride; with dolphins’ constant pleasant facial expressions that mimic a human smile, it is easy to think they will not mind. But I urge you not to get too close to these creatures, who deserve their own space in the wild. If you choose to swim with wild dolphins, you must not chase or harass them in any way. In addition to having some legal protection, dolphins also need to be able to sleep during the day and can be stressed by too much forced human interaction in the wild.

The first and most obvious reason to use caution and respect when swimming with dolphins is because there are laws that protect this species. Harassing marine mammals is actually illegal. Just like humpback whales and monk seals enjoy protection under the Marine Mammal Protection Act, this important law also protects dolphins in Hawai‘i the same as it protects all marine mammals (Wong). However, the problem with the wording of the Marine Mammal Protection Act is that “harassment” is a very vague term. To fix this and protect dolphins more thoroughly, a new rule was proposed in August of 2016 by the National Marine Fisheries Service of the National Oceanic and Atmospheric Administration (NOAA). This rule “… would prohibit swimming with or approaching within 50 yards of Hawaiian spinner dolphins” (Victor), the most common species of dolphins that are targeted by tour groups wishing for an interactive experience with these marine mammals. While this rule was not passed, it serves as a warning that if tour operators do not give dolphins respect and space, they could face a complete ban on the practice of swimming close to dolphins.

Aside from the legal implications of swimming with dolphins, another reason people should be respectful of dolphins’ space is because the spinner dolphins that swimmers are trying to interact with are actually sleeping. Day after day, tour operators can predictably find spinner dolphins swimming during the daytime hours in the same protected bays on the Kona side of the Big Island of Hawai‘i (“How to Swim with Dolphins”). The dolphins, which mostly are nocturnal, return to these places daily because these areas provide shallow waters and good protection from predators. This enables them to sleep. (Associated Press) When dolphins sleep, they shut down half of their brain. The other half stays awake to control breathing and to watch for predators. While they are in this half-asleep mode, they often swim slowly (“Swim With Dolphins in Hawaii”). “As a result, they can look awake and active even when asleep” (Associated Press). Just as humans cannot thrive with deficient sleep, dolphins struggle with the effects of sleep deprivation, too. According to Susan Pultz of the National Marine Fisheries Service, dolphins are constantly disturbed by swimmers when they are resting, which ends up affecting their fitness (Wong).

Another important reason people should be respectful to dolphins is because dolphins are stressed by close human activity in this natural habitat and it may have negative consequences. In the 2016 rule proposed by the National Marine Fisheries Service of NOAA, “At some locations, up to 13 tour boats have been observed jockeying for position on a single dolphin group, with up to 60 snorkelers in the water” (Wong). In addition to the lack of sleep that this causes, the crowded water causes stress on the animals and pressure to interact with the swimmers. Although this has not caused a decline in the spinner dolphin population yet, scientists fear that the stress may cause this problem in the future (Owen). Tour boats also cut through the pods, which separates mothers and their calves (Wong).

As you can see, swimming with wild dolphins may be a life-changing experience for you, but — on top of being in murky legal waters — it may be a harmful experience for the dolphin, affecting their sleep patterns and causing them stress. So please respect that they do not gather in Hawai‘i’s protected bays for your viewing and interacting pleasure. If you choose to swim with them, keep your distance, be respectful, and let them approach you rather than the other way around.

“How to Swim with Dolphins on the Big Island | DIY and Responsible Tours.” Love Big Island, http://www.lovebigisland.com/swim-with-dolphins-big-island/.

Owen, Erika. “You May Not Be Able to Swim With Dolphins in Hawaii Much Longer.” Travel + Leisure, 26 Aug. 2016, http://www.travelandleisure.com/animals/swimming-with-dolphins-hawaii.

Press, Associated. “Swimming with Dolphins in Hawaii Could Be Banned by the Federal Government.” KNXV, 24 Aug. 2016, http://www.abc15.com/news/national/swimming-with-dolphins-could-be-a-thing-of-the-past.